Activating the Innovation Culture in the Entire Organisation

Recently, I facilitated a workshop with 10 people. I’ve been working with these people for almost a year on innovation culture. What we wanted to do was to create some images on how to proceed to include all the employees of the company in turning the ship around so to speak.

One and a half year ago the company was acquired by a much larger company. This was a great accomplishment, but of course the risk was hat they would be swallowed buy all the work streams and procedures of this much bigger company. The intent was – and still is – that the small Danish company should keep its small-scale agility, and benefit from being a part of the much, much larger business context.

Prior to the workshop, Josephine Dahl had conducted one-to-one interviews with all the participants. The interviews where about how they viewed the organization, and about the innovation projects they were involved in. From all the interviews, pictures were sketched by Josephine, capturing the essence of the conversations. I have included an example of one of the pictures below: 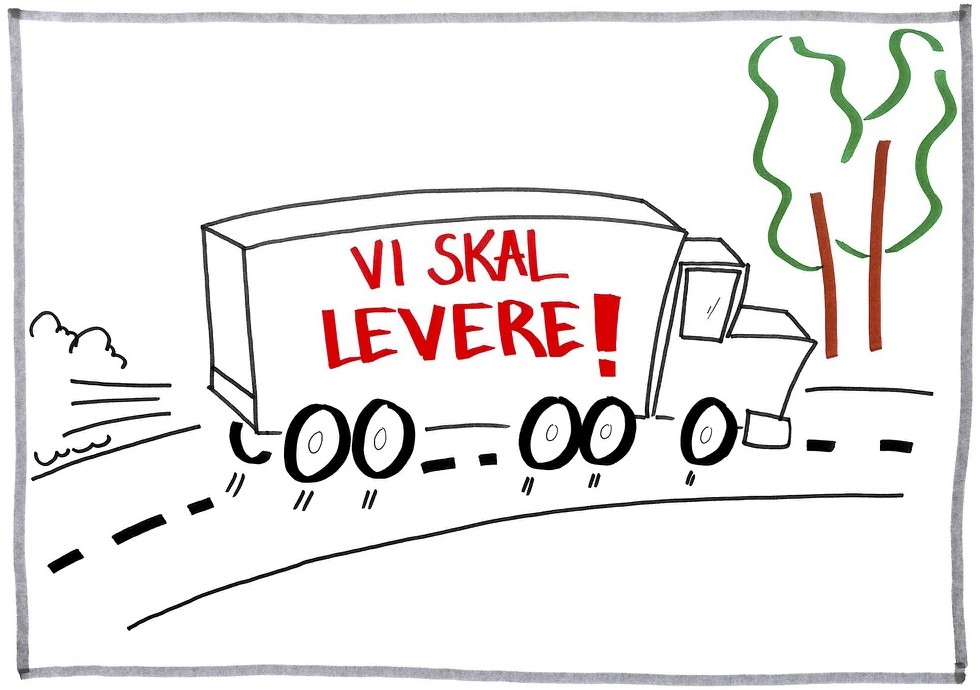 In the first part of the workshop we discussed these pictures. This was exciting and revealing, because no one in the group had seen all the pictures; so a clearer overall picture emerged from this.

We didn’t arrive at a completely clear and coherent picture, but we did identify common elements of the past, present and future of the company.

We then moved on to identify 10 different innovation projects to engage all the employees in for the next 2-3 months’ period. 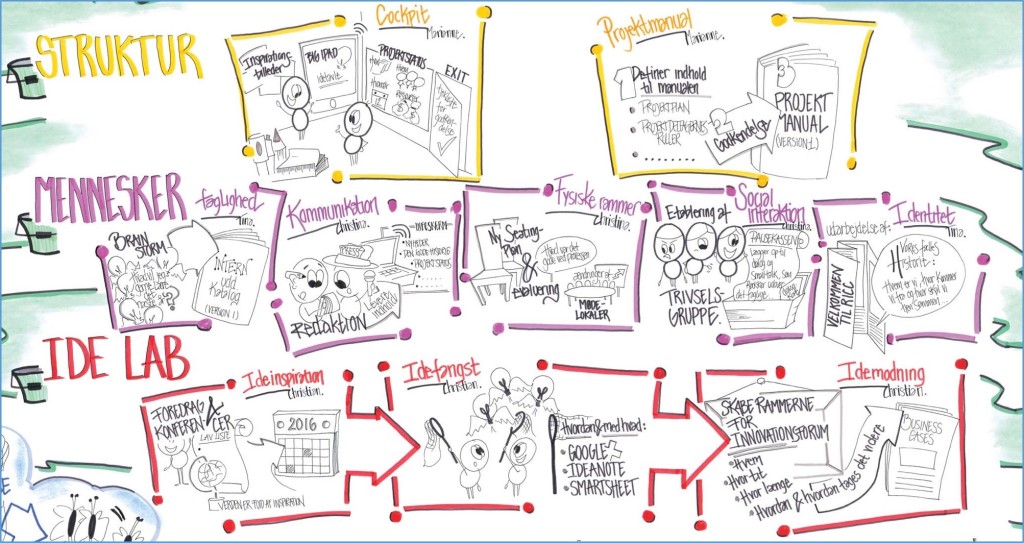 Everyone should be able to see him or her self in at least one project. What we wanted to do was to create small manageable frameworks that would fit into each individual’s personal preferences and skills.

In order to facilitate internal communication about the project we use various tools:

We are using this in the form of the aforementioned small pictures, but also to create a total overview of the project. Visual feedback is different, in my mind, from graphic recording and graphic facilitation: In graphic recording/facilitation the visuals very often arise more as the recorders interpretation than the images in the participants minds. With Visual Feedback, you get the opportunity of negotiation the visual as well as the total picture(s) on an individual as well as a collective level. The process takes a bit longer, but the impact may very well be more powerful, since you allow for incubation and tapping in to the wisdom, knowledge and frustrations of the entire group.

This is a classic collaborative project management tool (Gantt charts etc.), which is good for the classical project issues related to resource allocation, timelines and tasks.

A great web-based Kanban Board like tool that we use for a limited number of tasks in smaller groups. It’s highly visual and easy to use, you’re on your way in less than five minutes.

We use this to engage the entire organisation in submitting ideas for the 10 different projects, rate the ideas, and commenting on them. It is a big effort to curate this, and it does require a lot of nursing and coaching to motivate as many as possible to engage. The key here is to employ a multifaceted approach. Some need face-to-face coaching, some may be engaged by commenting, others may be motivated by the gamification aspect, some may be particularly interested in one topic, and some would be interested in rating ideas. The trick is to find each individuals sweet spot of engagement.

You may read more about how I’ve worked with Ideanote here.